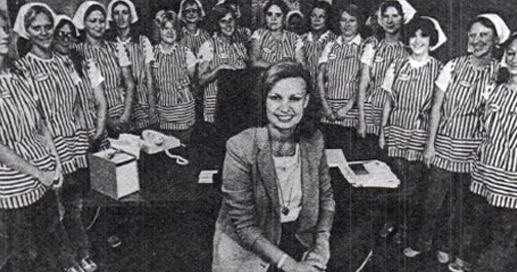 A SHIFT IN THE DOMESTIC CARE PARADIGM:

In the early 1970’s, Leone found herself with some free time after sending her three daughters off to school. It was an era when many women were entering the workforce after caring full time for the home and children. She recognized that if she, too, was going to seek employment she would have to hire a maid to fill the void at home.

Unable to secure dependable domestic help, Leone found having a maid a burden instead of a luxury. Transportation had to be arranged, lunch breaks, supplies and equipment had to be provided.The work performed was often inconsistent and of poor quality.

Recognizing a need, Leone found herself back in familiar territory….cleaning house. With an investment of $30.00 in supplies, Leone started cleaning a house or two in the neighborhood so she could be home in time to meet her children at the bus stop. Word of a new kind of “service” quickly spread and soon Leone had more work than she could handle by herself; “the American dream”.

It was not enough to have a vision. Leone had to quickly develop a system. To create a “science of cleaning “ if she was going to capitalize on this opportunity. She recruited one girlfriend and then another one to work with her. Within a year she formed her first four person cleaning team. She assigned each person a specific task using company assigned equipment and supplies. The team flowed through a house with efficient precision that modeled W. Edwards Deming’s Principals of Management. Leone developed a “McDonald’s type“ set menu of service. With a lot of hard work and determination, Leone fine-tuned her concept into what became The Mini Maid Service Company. A team of four people could clean 10 -12 homes per day. Consistent quality was assured with an inspection procedure method followed by crime scene investigators. The concept became so profitable that her former husband left his corporate position to start the second team. As a result they accomplished what few small business people do: launched an industry.

The local paper ran an interest story on Mini Maid and that was picked up by United Press International. The phone immediately started ringing with request on how to start a cleaning business. Like a McDonald’s Franchise, the Mini Maid business model could be replicated; training manuals were developed and the first Mini Maid franchise sold in 1973. Soon another paradigm shift occurred. Many men were fed up with the corporate cage and wanted out. They recognized the Mini Maid franchise opportunity as an entrepreneurial chance of independence, profit and freedom.